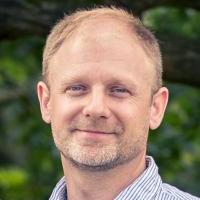 Edwin Jager is Associated Professorin Applied Physics. He received his Master degree in Applied Physics at University of Twente, The Netherlands in 1996. In 2001, he received his PhD in Applied Physics at Linköping University, Sweden. During his PhD-studies, he developed biomedical applications of polypyrrole microactuators, such as a “cell clinic” and a microrobot. In 2011 he moved to the Biosensors and Bioelectronics Centre, where he became associate professor in March 2012. He holds a visiting senior scientist position at the University of Wollongong, Australia at the Intelligent Polymer Research Institute. His present research interests include electroactive polymers, conducting polymers, bioelectronics, electroactive biomaterials, and polymer (micro-)actuators for cell biology, medicine and robotics. He is elected vice-president of the European Society of ElectroActive Polymers, EuroEAP, and was an active member of the society's predecessor the European ESNAM network (European Scientific Network on Artificial Muscles).